Hailing from Birmingham, RICARDO WILLIAMS has a REAL treat for us this summer as he drops the remake of his 2018 single, ‘He Ain’t Me’, featuring Slick Rick. Originally a R&B/trap infused production, the single receives a New Jack Swing-esque treatment from Grammy award-wining producer Kyle West.

As well as working on original music over the last few years, Ricardo has done backing vocals for a number of high profile artists including Stormzy, Tweet, and on Emeli Sande’s latest album, quickly gaining the reputation as one of the strongest vocalists in the UK.

After coming to BBC 1xtra DJ Ace’s, attention in 2018 and signing to his newly formed independent record label ‘Recordbox’ with the release of ‘Come Over’, Jamaican-born Ricardo gained critical acclaim for the track which featured R&B royalty Teedra Moses. His year continued to see his profile rise seeing him support Faith Evans at O2 Indigo in London and he has since teamed up with some of R&B’s leading lights on both sides of the Atlantic.

Here’s your chance to hear the master-on-the-rise; have a listen to ‘He Ain’t Me – Radio’. 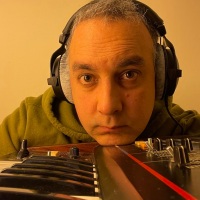