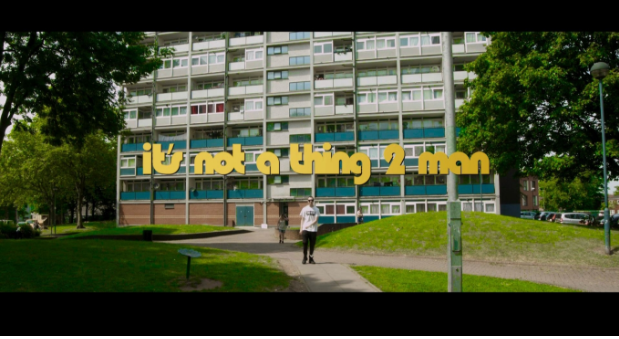 The SKATTA led Coventry collaboration of MCs have upped the levels on this video which has been unleashed to SBTV last week.

Fusing the sounds of grime and garage, ‘It’s not a thing 2 man’ is SKATTA‘s latest outing, as he shares the attention and brings through a range of heavy Coventry MC talent. Echoing what he did in 2015 with ‘Has it come to This’ which saw him appear live as a guest on BBC 1xtra, this is a high paced energetic sing a long grime hit which is all about the mindset of being able to hit your goals without it being a big deal!

The song features Coventry talent  BFAST, Outz, Ridla & ShadowCV6. ShadowCV6’s track ‘Not Alone’ was named Song of the Week by NEW LEASE MUSIC for two consecutive weeks in May.

Taking on the classic sound of UK garage music, JORDAN MORRIS is set to release track Celebrate through IQMG Records

The beat skipping kick drums married with the reggae guitar riff lay the foundations to the track as the tempo bubbles and flows, leading in to the vibesy hook.

Having previously collaborated with Dappy and Faith SFX, Jordan has continued to carve his musical niche, perfecting his current sound for forthcoming debut EP Discovery due for release in 2016.  Revealing that he’s been working with super producers such as P2J and writers ‘Roc-City’, responsible for hits for Usher, Rihanna & Ciara, the EP marks  great depth and talent from this upcomer in a way that hasn’t previously been heard.

Celebrate is out on 24th December via iTunes.

At the top of this month, UK R&B singer KYLE LETTMAN was here on NEW LEASE MUSIC with his single, Matter Of Time.

Two weeks down the line, the 90s-inspired old school number gets the garage treatment from production duo DISTANT LIGHT – check out the remix below.

The original version of Matter Of Time is from the five-track EP Under Construction, available now on iTunes.

R&B singer KYLE LETTMAN  and production duo DISTANT LIGHT have joined forces to drop a music video to their Garage-fuelled hit, Mind. This five-minute visual boasts a great storyline; not to be missed, check it out now!

The find out more about these guys, head right here.

Earlier this year, KYLE LETTMAN released his remake of Garage classic, Moving Too Fast. Daring to medal with a classic track, the results were fruitful and singer/songwriter received an incredible response across Radio and Online platforms seeing the record being supported across the BBC, Kiss and Capital networks….and it doesn’t stop there. 2015 has been quite the year for Kyle as he also opened the show at Omarion’s UK headline gig at KOKO helped by some serious online support from Pixie Lott!

Kyle isn’t the only one to have made some serious noise of late as production duo DISTANT LIGHT hit the music landscape last year with their official remix of UK RnB singer Angel’s chart-topping track Wonderful. The garage number quickly got the stamp of approval from leading tastemakers DJ EZ from Kiss 100 and BBC 1Xtra’s DJ Cameo. DISTANT LIGHT have worked their production magic on Ellie Goulding’s Beating Heart, Misha B’s Home Run and top 10 single All Cried Out by Blonde. Their recent effort Raggamuffin, was named Song of the Week here on NEW LEASE MUSIC.

It seems this is going to be one solid collaboration; so don’t miss out, have a listen to Mind.