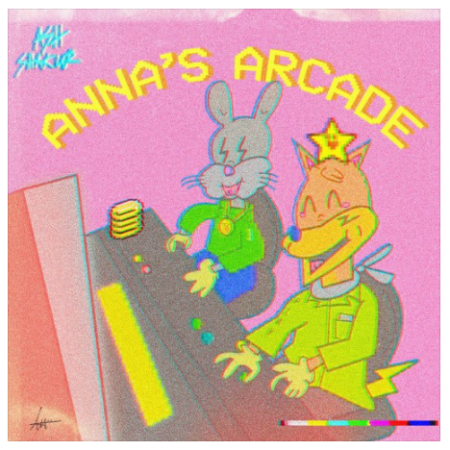 Illustrator and experimental hip hop artist ASH SHAKUR‘s blissfully witty jam, ‘Anna’s Arcade’, takes you on a nostalgic trip down memory lane, via the arcade to play everyone’s favorite video games. Sonically, 8-bit game inspired sounds are woven into a boom bap beat produced by Masked Man, whilst Ash delivers playful bars based around his youth, unrequited love and his video games obsession. Listen out for lots of gamer references, as Ash uses video games as a metaphor for life’s obstacles, as he explains:

“The first verse explains a small part of the music game and how you have to watch out for those bowers! I wanted to draw parallels of life’s challenges to the levels on a video game”. The last verse highlights the theme of, how people play games ie: she’s playing hard to get – or he’s a player. I want Anna’s Arcade to be the place you think about having the most fun. Every time you listen, I want to bring you back to this feeling.”

The south Londoner is known for his leftfield take on hip hop, mixing witty storytelling with smooth melodies and catchy choruses his unorthodox style and flow has won fans across the globe. ‘Anna’s Arcade’ follows previous single Horror Flick’ which was supported by Adidas on Spotify and Indie Shuffle, whilst other tracks. ‘Lead The Way’ (released on Kitsuné Hot Stream), ‘Never Alone’, ‘Nokia’ and ‘Shine’ have courted wide spread media support from BBC 1Xtra, Noisey, Complex UK and Notion.

Ash is also the co-founder of Art Life Central, a collective that expresses creativity and freedom through music and fashion. He aims to inspire people through his vibrant visuals and incorporates this art direction across all of his musical content.

Check out Ash’s vibrant track below…may I take this opportunity to wish all of you a very Merry Christmas.